Nearly 70 people attended as CUB celebrated 40 years of work for the people of Wisconsin and its founding by the Wisconsin Legislature in the fall of 1979.

The bill creating a nonpartisan consumer advocate for customers of Wisconsin’s utilities was signed into law 40 years ago this week by Republican Gov. Lee Sherman Dreyfus.

CUB recently feted the occasion with appetizers, cake and apple cider. In remarks to those gathered, PSC Chair Rebecca Cameron Valcq praised the

organization for its work but noted that Wisconsin has more to do. Other Midwestern states fund the role of the consumer advocate for residential customers at a much higher level than CUB, she noted.

Valcq presented a commendation from Gov. Tony Evers saluting CUB on its 40 years of advocacy.

Rep. Mike Kuglitsch, R-New Berlin, chair of the Assembly Energy and Utilities Committee, said that CUB’s focus on the price consumers and small businesses pay is crucial, because the energy costs are among the factors that busine 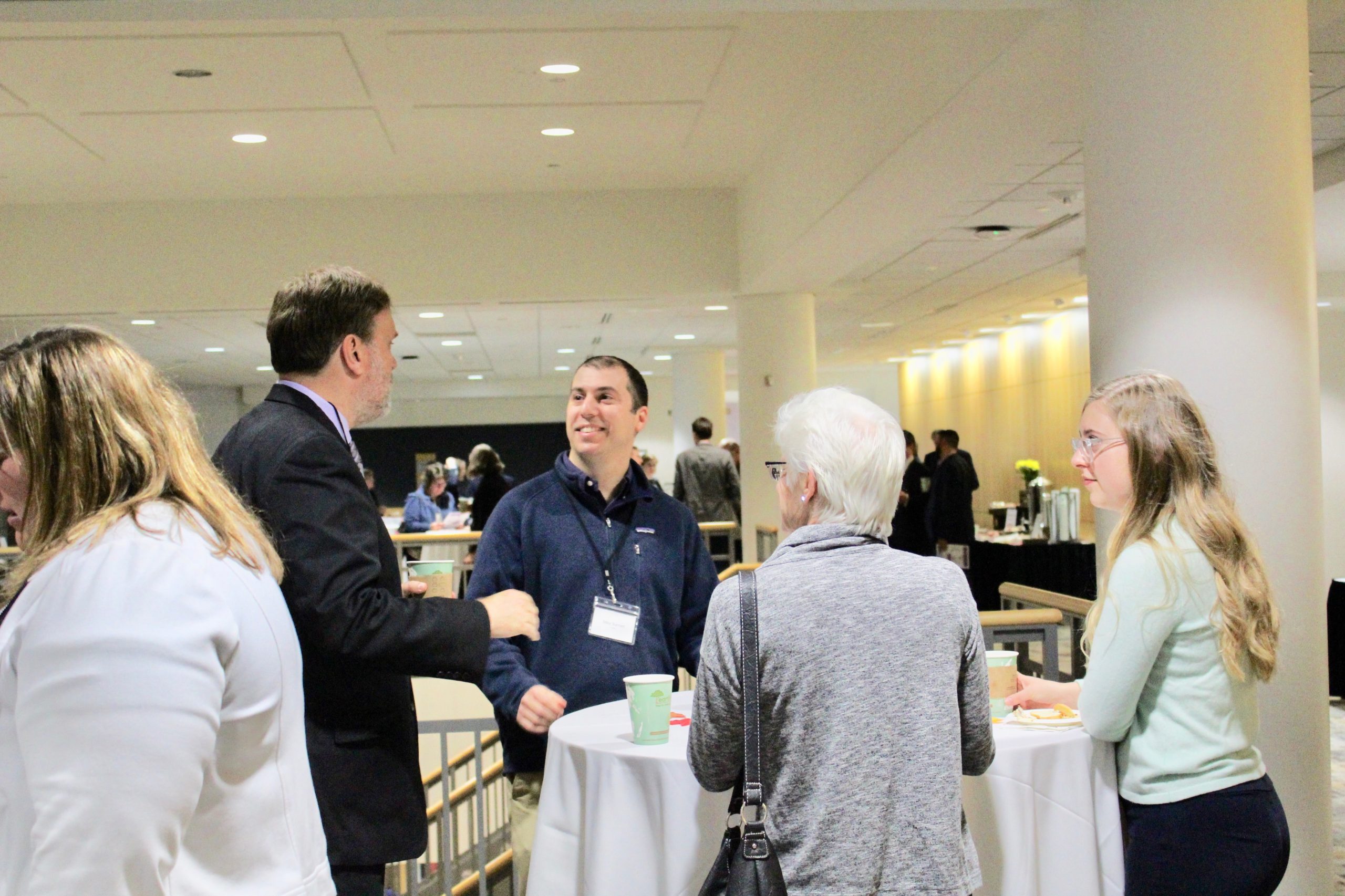 ss owners cite when they decide where to locate their firms. Kuglitsch agreed that a more sustainable and stable funding source was a priority for him.

Jim Wahner, the retired Assembly Majority Leader, wore a CUB button from 1979 and recounted tales of meeting with members of “Nader’s Raiders” as one of the first people to listen to Ralph Nader’s vision for a residential utility consumer advocacy group, or RUCAG, in every state in the country. Wahner said he liked everything about the concept except that acronym, and a team from Wisconsin eventually came up with “CUB.”

Tom Content, CUB Executive Director, said the evening was all about thanking everyone responsible for helping give CUB the staying power to survive financial challenges and make it to its 40th birthday. Over that time, that’s tens and tens of thousands of folks, from lawmakers and canvassers to board members and employees to donors and volunteers.

Content’s goal for CUB is to have it not just fight to survive, but for it to be able to thrive, in the years ahead. Wisconsin has finally answered the question about whether CUB can continue to exist.

Content’s vision for the next 10 years is a more effective CUB with more resources that is able to operate more effectively in a world in which CUB is now across the table negotiating with utilities rather than fighting via litigation in PSC cases.

CUB would like to thank its sponsors for the event, especially Host Sponsor American Family Insurance and Program Sponsor SlipStream. CUB would also like to thank our networking sponsors Arch Electric, Evolution Marketing,  Eileen Hannigan and Family and Milwaukee Comedy. We have been fortunate to also have support from our small business members – Bounce Milwaukee, HGA, Healium Hot Yoga, Lakefront Brewery, Outpost Natural Foods and Reynolds Transfer and Storage. In 2019 we were fortunate to be able to help promote and educate about energy savings to our members thanks to support from outreach and education sponsor Focus on Energy. 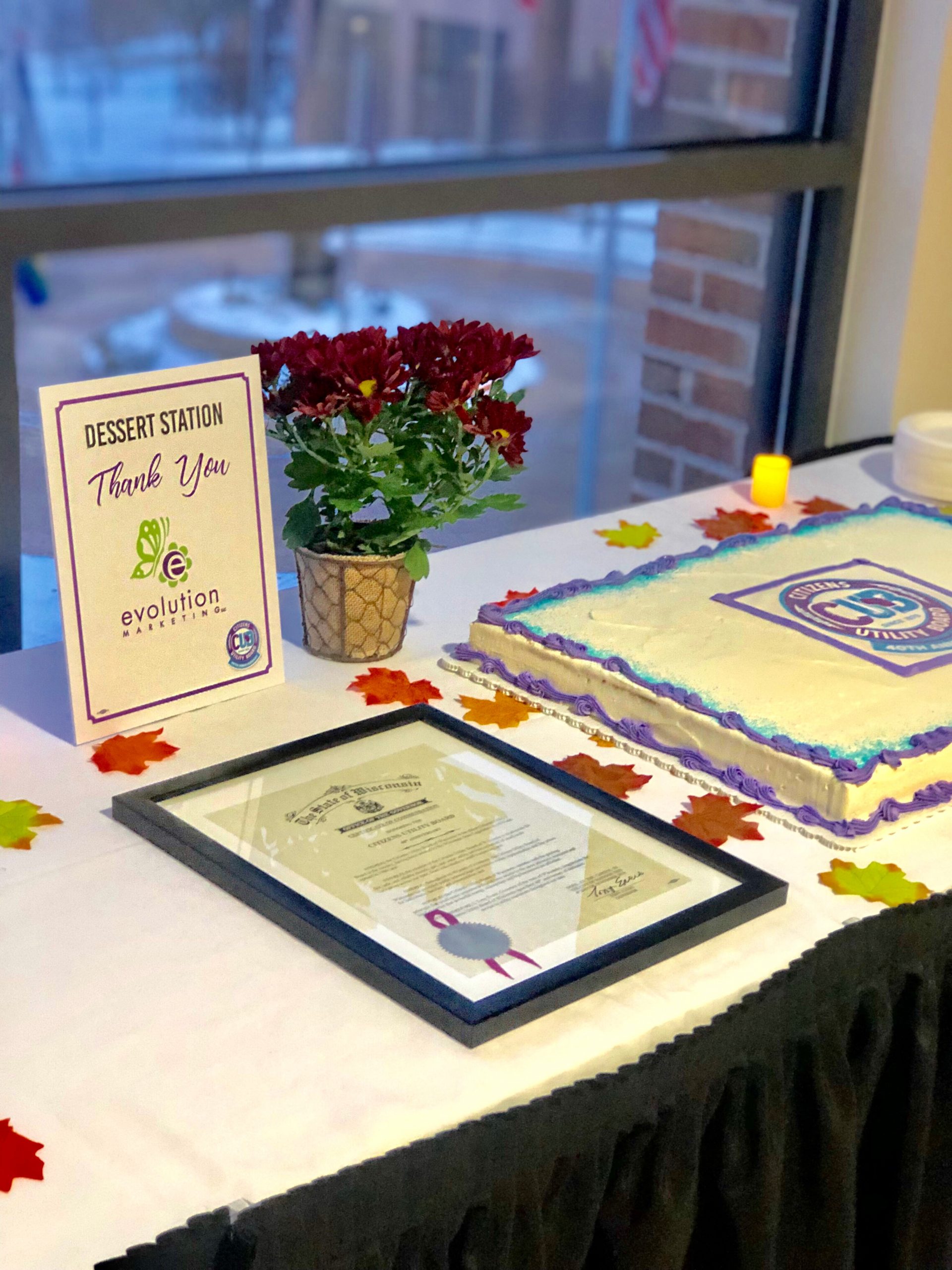 Here is a copy of the Proclamation signed by Gov. Tony Evers, presented to CUB:

WHEREAS; the mission of the Citizens Utility Board of Wisconsin is to advocate for fair, safe, and reliable, electric gas and water utility services on behalf of small-scale consumers across our state, from individuals to small businesses; AND

WHEREAS; throughout its 40 years of existence, the Citizens Utility Board of Wisconsin has provided public interest legal services to ensure representation and fair prices for individuals, families, and communities; AND

WHEREAS; the Citizens Utility Board of Wisconsin operates with the guiding principle that small-scale consumers should have access to the same advocacy resources and legal expertise that powerful energy monopolies and big businesses are afforded;

NOW THEREFORE, I, Tony Evers, Governor of Wisconsin, congratulate the Citizens Utility Board of Wisconsin upon their 40th Anniversary of dedicated service to utility customers throughout our state.